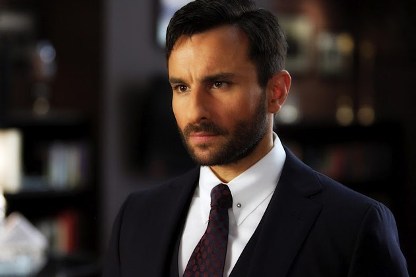 BollywoodGaram.com: Apart from Kareena Kapoor, actor-turned-producer Saif Ali Khan will also be seen in an item song in the upcoming movie ‘Agent Vinod’. Saif will be grooving to the tunes of ‘Pyaar Ki Pungi’ while viewers have already seen the magic of Kareena Kapoor’s ‘Dil Mere Muft Ka’.

The new song is expected to catch the attention of listeners as the first 20 seconds are comic, with cheeky notes and free footsteps. When spoken to Saif about the song, the producer said that there is a scene in the movie in which the protagonist is caught by the CCTV cameras and is behaving in a certain way.

So the makers thought of giving it an extension and making it in to an item song. But now the reports say that the new song might camouflage Bebo’s mujra sequence in the movie.

The song ‘Pyaar Ki Pungi’ has been composed by Pritam Chakraborty and is written by the popular lyricist Amitabh Bhattacharya. Singer Mika has sung the song and is choreographed by Jasmin Oza. Director Sriram Raghavan on the other hand has not given much importance to the songs as he thinks that the songs might take away the attention of the audience from the main plot.