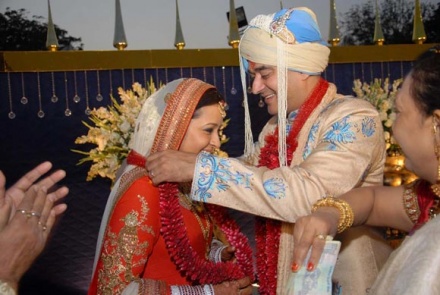 The ceremony was attended by close friends, celebrities and family. Sen was wearing an elegant Sabyasachi Mukherjee outfit for her wedding in addition to creations from other designers like Suneet Verma, Shantanu and Nikhil.

Reemma and Shiv have known each other since a year and had met through common friends. After the wedding , the actress will relocate to Delhi but will continue acting and also has two films for release.

While talking about the upcoming movies, Sen said that she will continue to do good characters and is doing ‘Gangs of Wasseypur’ and a movie by Rahul Dholakia. The actress added that she also has a couple of offers in her hand and is considering them at the moment.

For the reception, Reema was wearing a beautiful lehenga.

The actress began her career in Mumbai with modelling and appeared in various advertisements. Sen then moved to acting through south Indian movies and started off with the Telugu movie ‘Chitram’ in which she starred opposite Uday Kiran.