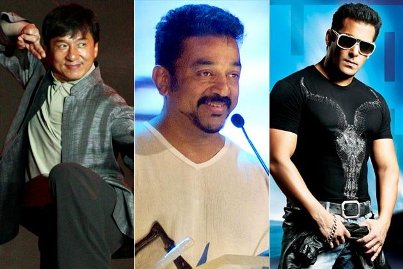 Bollywood Garam: After super hot actress Mallika Sherawat, actor Salman Khan might also soon be seen sharing screen space with the Hong Kong star Jackie Chan. Salman is considered as the most popular star in the Indian industry today and is the one star which helps makers to keep the box office ringing.

Recently reports state that Aascar Ravichandran is keen on making a sequel of Chan’s ‘Armour of God’. Salman Khan has been reportedly approached to be a part of it.

The movie is supposed to be multi-lingual film and the film maker is also keen on roping in the south super star Kamal Haasan for the sequel. Aascar has been in talks with Chan since the year 2004, when the actor was shooting for ‘The Myth’ in India.

Chan heard about Bollywood and has been keen to be a part of it. If everything falls in place as planned, then the movie will be a big project with an experience larger than life. With the potentiality of Salman, the skills of Chan and the talent of Haasan, the movie is likely to make a good package for the Indian as well as the International audience.