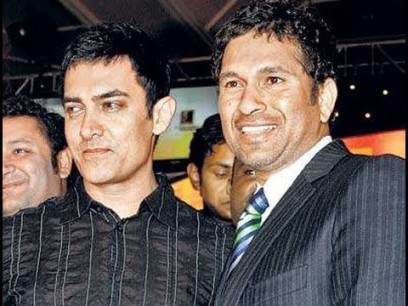 Bollywood Garam: After creating history by making a century of centuries, Indian cricketer Sachin Tendulkar is all set to set his leg in Bollywood. Amidst the speculations whether the cricketer will retire from cricket or not, Tendulkar might soon be seen on the silver screens much to the surprise of his fans, who have usually seen him on the field.

Some of the recent reports say that the cricketer is now all set to face the cameras and the director. Buzz is that Tendulkar has been roped in for a cameo in the upcoming movie ‘Ferrari Ki Sawari’, which has already created a stir in the country. The item number by Vidya Balan and Sharman Joshi’s brilliant performance has already created a curiosity among the audience. And now Vidhu Vinod Chopra wants to stir things up by bringing in the God of Cricket Sachin in his movie.

More reports have said that Sachin might not just do a cameo, but do a full-fledged role in the movie. Bollywood Garam sources say that Sachin’s Bollywood break might come up with the movie ‘Ferrari Ki Sawari’. Popular author Shobha De tweeted, “There’s a distinct impression that Sachin is preparing for a new innings. In Bollywood. Fans will be over the moon if that happens,”.

The news of Sachin in Bollywood has spread like wildfire in the industry after which many film makers have expressed that it would be a fresh experience for the audience. Director Aneez Bazmee said that they would love to see the Little Master on the silver screens. Moreover, in the recent party thrown by Mukesh Ambani for Sachin’s success, the cricketer was spotted chatting with Vidhu Vinod Chopra and it has been assumed that they might be discussing about the role of the cricketer in the much awaited flick.