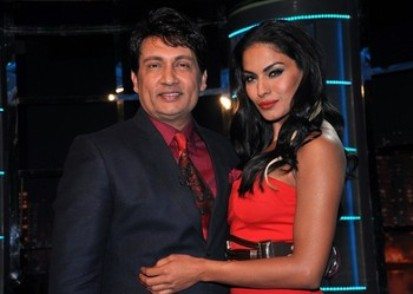 Bollywood Garam: Pakistani actress Veena Malik – who is popular for grabbing headlines in the most shocking ways – appeared on the popular show of Shekhar Suman, Movers and Shakers. While on the chat show, the actress and the show host had immense praises for each other and it seems like a good way to make her presence felt in the Indian media, once again.

Malik stated that she was very excited when she got a call from the show makers. Suman praised the actress on the show and said that the actress does not mix words and spoke what she felt.

Malik recently posed nude for a popular magazine cover and later claimed that the pictures were morphed. Later the actress went missing from Mumbai city in India where she was shooting for a movie. Her missing spree had worried many of her fans, but she was just going under the radar.

Veena is all set to appear in the popular reality show trend-set by Rakhi Sawant, ‘Swayamwar’. The actress will be selecting a groom for her on the show. The earlier candidates of the show were Ratan Rajput and Rahul Mahajan apart from Rakhi Sawant. Malik is also doing a few Bollywood movies which also includes one with ex beau Ashmit Patel.

Veena became popular in India after her stint in Season 4 of reality show ‘Bigg Boss’ where she did not leave any stone unturned to display her affection for Ashmit.