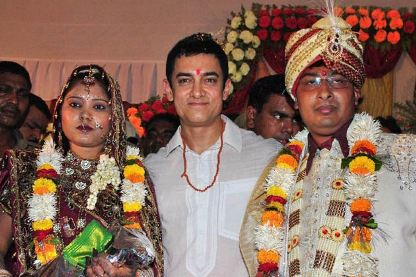 Bollywood actor Aamir Khan, is not only known to be a perfectionist but is also known for keeping his promises. The actor on April 25, attended the wedding of his friend Ram Lakhan’s son, who is an auto rickshaw driver in Varanasi.

The 47 year old actor reached the venue of the wedding amidst chaos as the media and a large crowd had gathered to catch a glimpse of the super star. Aamir reached post mid night at the wedding but was supposed to reach there at 09:30 pm.

The actor reached late as he had to travel by road from Patna. Ram Lakhan met the actor during the promotions of the movie ‘3 Idiots’. Aamir at the wedding venue hugged his friend and congratulated the newly weds Rajiv and his wife Vijayta before they posed for the paparazzi.

The actor is these days also busy with the promotions of the reality show ‘Satyamev Jayate’, but Aamir clarified that he was not there to promote anything but was there to attend his friend’s son’s wedding. The actor also revealed that he met Ram Lakhan during the promotion of the blockbuster movie ‘3 idiots’ after which the auto rickshaw driver came to his house a year back to invite him.