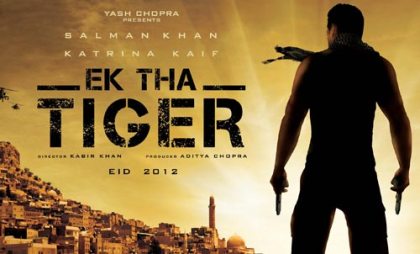 As the makers of the movie ‘Ek Tha Tiger’ have released a new teaser of the movie, it has received a massive response from the fans as well as the film fraternity. Salman Khan the protagonist is seen in his hard core action avatar, for which he is usually known for.

The new teaser was launched on May 10, 2012 and was also released with the movie ‘Ishaqzaade’ starring Arjun Kapoor and Parineeti Chopra. Celebrities in appreciation to the new teaser too their social networking site Twitter accounts to express.

Film maker Anurag kashyap, described the teaser as ‘intriguing’, while Preeti Zinta expressed ‘Salman rocks’ in it. The new teaser has given a short idea of the movie, in which it has narrated about the working of the intelligence agencies of India and Pakistan.

The teaser also introduces an agent named Tiger, played by the actor Salman Khan. The new trailer has suggested that the movie is purely based on action and also hints at the basic idea of the story. The disappointing part is that the trailer has not shown the romantic side of the movie does not even have a single shot of Salman and co-star Katrina Kaif together.