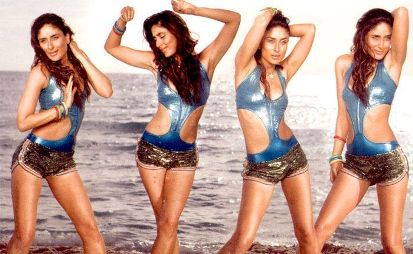 Bollywood actress Kareena Kapoor, started the trend of zero figure in the industry when she was filming for the movie ‘Tashan’. But then the actress went back to her chubby best, after which the actress still looked great and sexy.

The ‘Jab We Met’ actress said that being fat is not sexy and that any one who says that is talking crap. Bebo added that Voluptious is sexy but fat is out. The actress also said that any woman who says she does not want to be thin is talking non sense as it is every woman’s dream.

Now the actress is back to her size zero avatar as she is devoted to yoga and is also on a strict tailor made diet, by her popular dietician Rujuta Diwekar also the author of the best seller ‘Dont Lose Your Mind Lose Your Weight’.
The hard work of the actress is seen in the upcoming item song ‘Halkat Jawani’ from the much awaited movie ‘Heroine’ directed by Madhur Bhandarkar. The actress was seen at her plumpy best in the movies like ‘Ra.One’ and ‘Golmaal 3’.

Now the actress has worked out hard for her next item number and is all set to steal the hearts of millions of her fans.