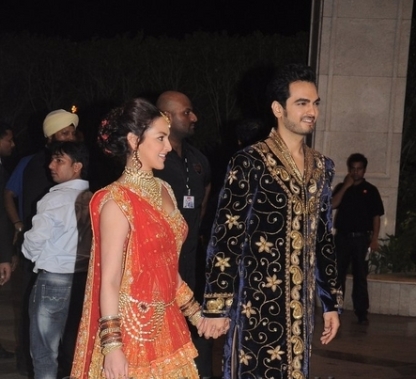 Esha looked stunning in an orange lehenga created by Rocky S and was seen walking in hand in hand with fiancé Bharat Takhtani. Takhtani also looked grand in a blue sherwani.

The actress and Bharat were generous enough to pose for photographers waiting for them and even gave some information about the ceremony. The to-be bride said, “I have called everybody, friends and family. This would be the wonderful event. I am madly in love with him. Since, I love dancing, we are looking forward for our performances”.

However, everyone was waiting to have a look at the would-be father-in-law Dharmendra, who refused to come out and pose for photographers. Even step-brothers Sunny Deol and Bobby Deol did not turn up for the photographers, while cousin Abhay Deol was spotted at the event with his girlfriend Preeti Desai. The ceremony was held in a hotel in Mumbai.

Genelia and Ritesh Deshmukh at the sangeet