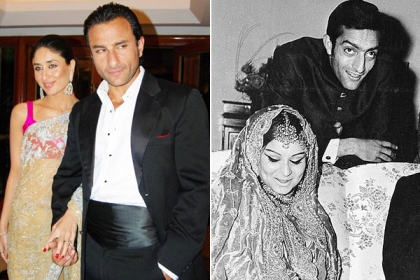 Preparations are going on in full swing for the upcoming wedding of the Bollywood couple Kareena Kapoor and Saif Ali Khan. Saif and Kareena will be tying the knot on October 16 and the bride to-be is already searching for her bridal outfit.

Many might think that the actress might go for the best Manish Malhotra outfit but that is not the case. This time tradition is going to play a more important role than Kareena making a fashion statement on the wedding day.

Reports say that Bebo will be wearing her mother-in-law Sharmila Tagore’s sharara instead of a designer outfit. While Kareena shops for the rest of the things, Sharmila’s favourite designer Ritu Kumar will be handed over the 43 year old wedding sharara, to be altered to suit the modern sensibilities.

Wonder if Kareena is happy about wearing a 43 year old outfit for her big day. Sharmila and Saif’s sister Soha Ali Khan confirmed that the wedding will take place at Pataudi on October 16 this year. Sharmila is the wife of the late cricketer Tiger Pataudi who passed away last year, when Saif was shooting for his movie ‘Agent Vinod’. Meanwhile the person who has become the most secretive is the to-be bride herself.