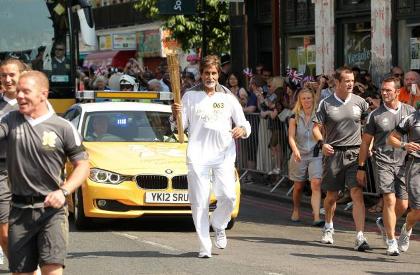 Bollywood super star Amitabh Bachchan in a proud moment for the Indians, on July 26, 2012 carried the Olympic Torch at Southwark in London. The star was cheered by several of his fans a day before the opening ceremony of the London Olympics 2012.

The 69 year old was seen dressed in a white track suit with an Olympic logo. The star covered a distance of 300 meters and cheered the fans as he ran and walked occasionally.

Bachchan said that it was a proud moment for him and his country to be invited to carry the Olympic flame. The other personalities who were also a part of the relay included, UN Secretary General Ban Ki Moon and NRI businessman, Laxmi Mittal.

Bachchan even Tweeted about the event and wrote, “OK!! HERE IT IS. Have been invited by London Olympic Organizing Committee to carry the torch in the relay tomorrow … Honored to be asked to carry the Olympic Torch in London at Southwark around 10:30 AM !! A proud moment for me and country”. Meanwhile, the Indian composer A R Rahman has teamed up with the Slumdog Millionaire director Danny Boyle to compose a track for the much awaited inaugural event.