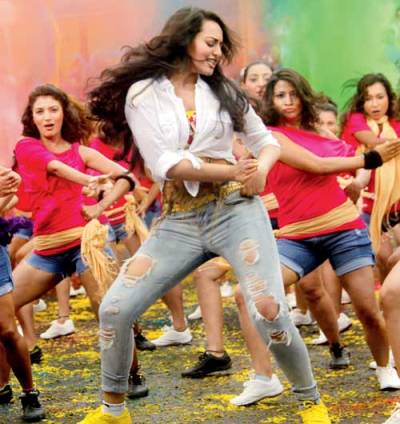 Bollywood’s veteran actor Shatrughan Sinha is currently in the hospital, recovering after going through a by-pass surgery. The actor was recently thrilled when his daughter Sonakshi Sinha showed him her first item song ‘Go Go Govinda’ from the upcoming movie ‘Oh My God’.

The song is a Janmashtami special track and the actor missed to see the rushes. But daughter Sonakshi brought a special CD for her father to see in the hospital. Sinha was shown the song on the laptop and Shatrughan reportedly enjoyed the song.

The veteran actor said, “Popular Govinda numbers like Shor Mach Gaya Shor Dekho Aaya Maakhan Chor and Teen Batti Waala Govinda Aala were filmed on me, so I enjoyed Sonakshi’s Go Go Govinda from Akshay’s film. I feel fortunate that Govinda songs are all in the family.” Sonakshi in the song is seen matching steps with choreographer Prabhu Deva.

Sonakshi has given back to back hits like ‘Dabangg’ and ‘Rowdy Rathore’ and the actress will soon be seen in the upcoming Shirish Kunder movie ‘Joker’. The actress in the movie will be sharing screen space with Akshay Kumar. Kumar had roped in his lucky charms Sinha and Prabhu Deva for the Govinda song from the movie which is based on Paresh Rawal’s play.