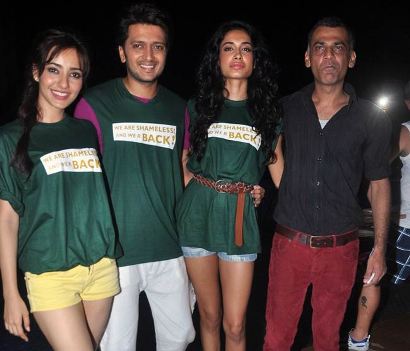 The makers of the recently released movie ‘Kyaa Super Kool Hain Hum’ along with its lead actors have been booked by a community forum. The forum has alleged that certain scenes from the movie have hurt their religious sentiments.

The complaint has been filed by Joseph Dias, a resident of Bandra who is also the general secretary of Catholic Secular Forum. After the complaint was filed the police booked the team of the movie under the IPC sections 295A which means deliberate and malicious acts intended to outrage religious feelings and also section 34 which are acts done by several persons in furtherance of common intentions.

Abhay Shastri, the senior inspector at Bandra Police station said, “We have registered a case against the producer, director, writer, actors of the film and others under the relevant sections of the IPC, though no specific names have been mentioned”. Shastri added that the matter is at present being investigated and arrests will be made if the film producer , director and writers are found guilty.

The movie was released on July 27, 2012 and stars Tusshar Kapoor, Riteish Deshmukh, Neha Sharma and Sarah Jane Diaz. Joseph said that in the movie the priest is shown in a poor light and makes a mockery of the Christian sacrament.