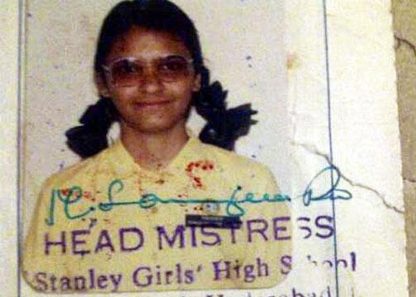 Bollywood actress Sherlyn Chopra, who became the first Indian woman to feature on the International adult magazine Playboy, recently tweeted a picture of how she looked in school. The sexy actress Tweeted a picture of her in which she is seen with oversized specks, hair in bunches and shirt buttoned up to her chin.

The picture is surely unbelievable but it was thought that it was brave of the actress to post such a picture of her on the social network. The photo is of Sherlyn when she was about 15 years old who studied in Stanley Girls High School in Hyderabad.

However, after a while the actress deleted the picture from her Twitter feed. Sherlyn was seen in the movie ‘Dil Bole Hadippa’ opposite Shahid Kapoor and Rani Mukherjee.

The actress also participated in the third season of the popular reality show ‘Bigg Boss’. Chopra for the international magazine posed nude and also shared the pictures of the shoot at Hugh Hefner’s mansion. Sherlyn revealed that she had approached Hefner through email and within four to five days the team got back to the actress to feature on the magazine. Chopra hasn’t been much popular on the Bollywood side but managed to make to an international platform.