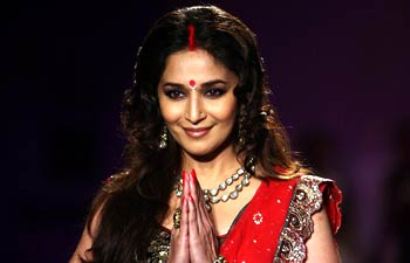 Veteran Bollywood actress Madhuri Dixit on August 10, 2012 stole the show as the show stopper at the PCJ Delhi Couture Week. The actress was seen dressed as a Goddess for designer Anju Modi’s Bengali inspired collection.

Madhuri recited a Rabindranath Tagore poem and then hit the ramp with her magical smile and looked absolutely breathtaking in the Chandramukhi like avatar from the movie ‘Devdas’. The track ‘Jodi Tor Dak Shune Keu Na Ashe’ in the voice of Amitabh Bachchan played in the background.

Modi while talking about her collection said, “My collection is inspired by Bengali literature and the films inspired by it, such as Charulata,Devi, Parineeta and Devdas. Red is a very prominent colour in Bengal. I have focused on the power of woman — lovable and energetic. I have taken the influence from Bengal and twisted it to make a fashion statement”. The designer added that Madhuri is the epitome of elegance, an intelligence and passionate human being.

The show began with the models walking down the ramp and scenes in black and white Bengali films playing at the backdrop. The scenes showed Bengali women walking at the river side and the iconic Howrah Bridge. The colours used in the collection were mostly red, white and black.