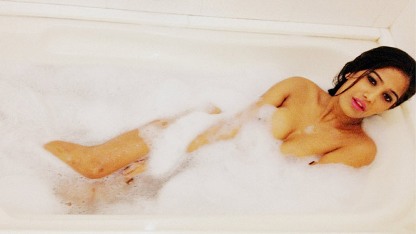 Strip queen Poonam Pandey has struck again with her strip act. But this time instead of receiving wows and whistles, the model was criticised for wasting water when the entire nation is facing water shortage.

The final Tweet revealed what Poonam was actually up to the whole day. The Tweet said, “#BathLikePoonamPandey haha trending whole day…thanx for loving me so.. luv u all..”. This made it clear that she was busy shooting for the sexy bubble bath pics the whole day and tried to grab attention from Sushil Shinde who was trying hard to win a medal for the country at 2012 London Games.

But this did not go down well with many of the followers of the model who slammed her for wasting water when the country is facing serious water crisis. One of the followers of the model named Pankaj A Tweeted, “We have so much water shortage and this @iPoonampandey is bathing since morning. No saving water. Another point to prove why education is must.” May be this time the model failed to grab attention.