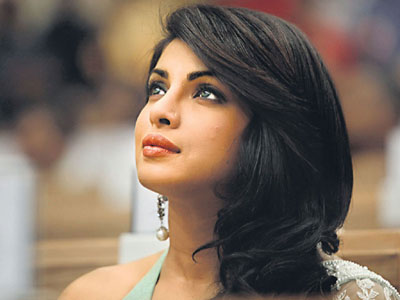 Bollywood actress Priyanka Chopra started off the year with a spectacular performance in the movie ‘Agneepath’ but then faced criticism with the movie ‘Teri Meri Kahaani’. recently there were speculations that the actress is eyeing the upcoming Prakash Jha Project ‘Satyagraha’.

On the other hand Chopra was completely unaware of the rumours that were being rotated and was actually surprised when she came to know about what the grapevine had been talking about. One of the close friends of the actress revealed that the rumours are completely untrue.

The friend added that the actress has not been approached by Jha for any kind of project. It was also revealed that the ‘Agneepath’ actress is dead busy with the shooting of the upcoming super hero movie ‘Krrish’ opposite Hrithik Roshan.

Chopra is also all set to release her upcoming international album for which she is constantly making trips between India and US. The actress has also lined up a couple of more projects due to which the actress has not time to indulge in new projects. Film maker Prakash Jha had originally thought of Priyanka for the movie ‘Satyagraha’. As for now Priyanka has a lot of work to do from promoting ‘Barfi’ to wrapping up ‘Zanjeer’ and so on.