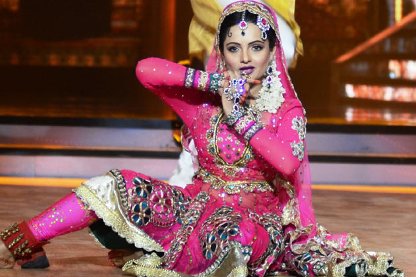 TV actress Giaa Manek, also formerly known as ‘Gopi Bahu’ is the latest celebrity to be eliminated from the celebrity dance reality show ‘Jhalak Dikhla Jaa’. The elimination of the actress has left her shocked and surprised.

The actress, who gave up her TV role from the rival channel, has a huge fan following and has constantly showed her versatility by showing something new to the audience and the judges. Manek said, “It was hard to believe that I was eliminated. I scored higher points (26) than Karan Wahi and Shibani Dandekar who were in the bottom three with me. I’m also more popular with fans”.

The actress also said that it was shocking as she was constantly working on herself. Giaa also felt that she experimented on the show like no other contestant on the show. The actress said, I have taken so many risks, especially for a non dancer. It’s not fair to pair dancers with non-dancers.”

The shocked actress also alleged that the TRPs play a major role in the elimination and said that if throwing her out was good for the show’s TRP then she totally respects that decision but did not expect this at all. As for now the actress says that she needs to take a week’s break to just sleep, relax and rest.