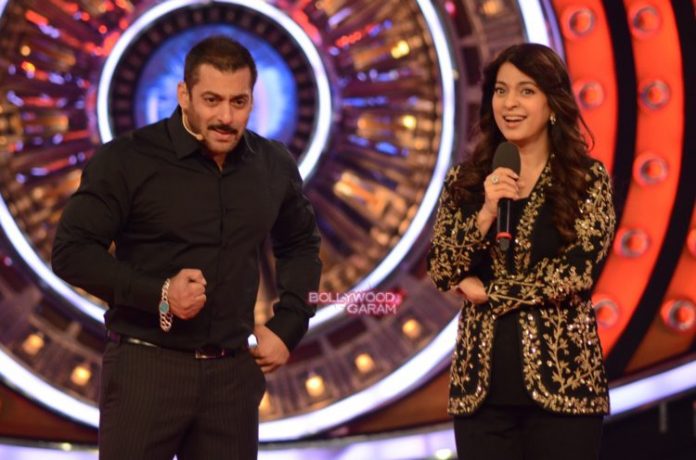 Bollywood actress Juhi Chawla dropped on the sets of the reality show Bigg Boss to promote her upcoming movie ‘Chalk n Duster’. Day 84 started with a shock for the contestants that there will be a double eviction this week.

Juhi enters the house on her number ‘Mere Mehboob Mere Sanam’ and turns in to a teacher as she begins her quiz session with the contestants. The actress not just asked questions but also punished those who gave the wrong answer.

Juhi then left the house and came on the stage to meet the host Salman Khan and narrated her experience in the house with the contestants. The episode also had a confession session when actress Tanisha Mukherjee talked to the contestants, who confessed all the wrong things that they did during this journey in the house.

Contestants in the house have now become more vulnerable to fights and arguments as the finale fast approaches. This week, Mandana Karimi was the contestant who got all the attention with several fights and arguments. Meanwhile, the contestants in the house are predicting the Keith has all the chances of winning the show while Mandana has become popular among the audience due to her constant quarrels.