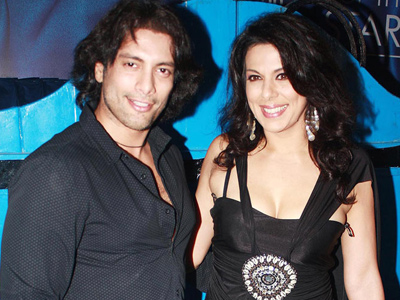 TV actors Pooja Bedi and Akashdeep Saigal have been romantically linked to each other since the reality show ‘Bigg Boss’. But now Aakashdeep, who is popularly known as Sky has taken the relationship further and has tattooed the name of Pooja on his bicep.

Pooja Tweeted, ‘walker came over with my name tattooed on his bicep!!! I guess I now know how much I mean to him!!!’ The mother of two, was obviously touched by the gesture and said that she was deeply moved by his lovely gesture when he came with a huge tattoo of her name on his bicep.

Pooja added that Akash is a great person and that they enjoy each other’s company. When asked about marriage, the actress said that they are not sure where the relationship is taking them but is happy the way things are moving.

Bedi says that she is currently juggling between work and her kids and needs to settle down when she can give her 100 percent to the relationship. The actress also said that her kids are her priority and that her kids have to approve him first. Pooja was earlier linked to choreographer Hanif Hilal after she participated on a celebrity dance reality show.

F.R.I.E.N.D.S reunion episode to be premiered on Zee5 for Indian audience