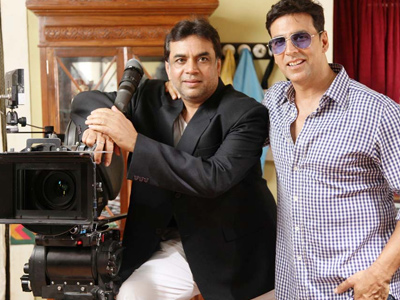 Bollywood actor and comedian Paresh Rawal has this time donned the hat of a producer for his upcoming venture ‘Oh My God’. Rawal says that he does not believe in film promotions but being the producer of the film he will have to do it.

The actor turned producer while talking to the producers said that there is a responsibility and also a pressure but he will be to pay for it. Rawal has also said that mouth publicity is the best publicity but now it is the necessity to promote the film as a producer.

The music of the movie was launched on the sets of the singing reality show Indian Idol after the press conference. Rawal in the movie has shared the screen space with Akshay Kumar in many films including ‘Hera Pheri’ ‘Bhagam Bhag’, ‘De Dana Dan’ and others.

The producer also said that the journey was a peaceful one. The actor added that as a producer when two different people meet at the same platform they should trust each other and like each other as a human being. Paresh also shared that no matter how many years you have spent in a field, you still learn something new on a daily basis.