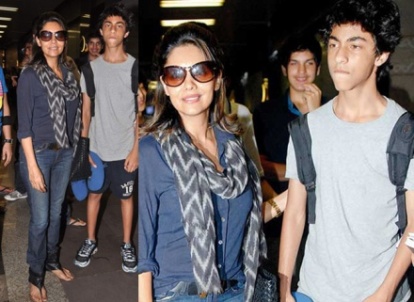 Bollywood actor Shahrukh Khan’s son Aryan has grown up and is all set to make his parents proud. The young lad was recently snapped with mother Gauri Khan while he was leaving for London to pursue higher studies.

Aryan will be studying at the Sevenoaks School in London while mom Gauri accompanied his on his journey. The star kid was seen dressed in a casual t-shirt and sporty shorts. The grown up kid also had his friends at the airport who came to see him off.

A family friend Kajal Anand was also seen at the airport along with Aryan’s friends. Some of the earlier reports had claimed that Shahrukh had enrolled his son in a prestigious school in London as he wants the media glare away from Aryan’s life.

Close friends of the actor say that Khan is worried about Aryan’s college life and he wants to take away the media glare away from his life and wants Aryan to concentrate on his studies. Aryan was studying at the Dhirubhai Ambani International School in Mumbai . Reports have also said that Shahrukh wants his daughter Suhana to also study at the Sevenoaks School in London. Meanwhile Shahrukh is busy shooting in Kashmir due to which he couldn’t be there for his son when he left.