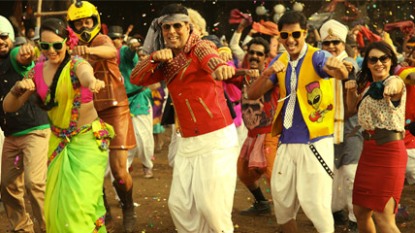 Many people had waited for the release of the sci-fi thriller ‘Joker’. But as the movie released on August 31, 2012 it has now become evident why Akshay Kumar was unhappy about the movie, despite the movie is its own production  from Hari Om Entertainment.

Film maker Shirish Kunder had intended to bring something Hollywood style ET for the Indian audience, which turned out to be crap.  The Akshay Kumar and Sonakshi Sinha starrer movie is a story set in a village called Paglapur which does not have its place in the official map just because of the fact that it is populated by a bunch of freaks.

Akshay plays the role of Agasthya, who is a US based scientist who build a trans receiver to communicate with the aliens. Agasthya is accompanied by Diva played by Sonakshi on the mission.  Agasthya realises that the village is still stuck in the past as the authorities no longer acknowledge its existence on paper or otherwise.

Akshay did the best he could but that is not enough, while Sonakshi’s existence in the movie is not understood. Thankfully, the movie is just an hour and a half long, so the boredom is not pulled for long. Overall, a movie to be watched at your own risk.