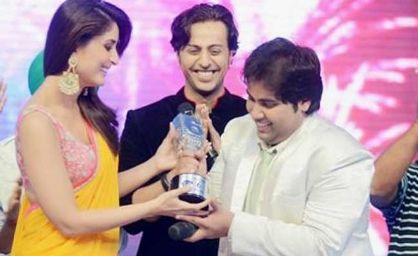 Punjabi guy from Amritsar Vipul Mehta was announced as the winner of the sixth season of the popular singing reality show Indian Idol on August 1, 2012. Mehta claimed the title and left behind the other two finalists Devendra Pal Singh and Amit Kumar who were also Punjabis.

Vipil took home a cash prize of Rs. 50 lakh, a Nissan Micra Car, a Suzuki Hayate Motorcycle and also a contract of a music album with Universal music. The winner of the show also took away three lakh rupees from Max Life Insurance and off course the sparkling trophy.

The results were announced by Bollywood actress Kareena Kapoor and film maker Madhur Bhadarkar who came to the show to promote their upcoming movie ‘Heroine’. The prize money was given away by the judges of the show Asha Bhonsle, Sunidhi Chauhan, Anu Malik and Salim Merchant.

The show was also graced by Ranbir Kapoor, Priyanka Chopra and Ileana D’Cruz who came to promote their upcoming movie ‘Barfi’. Vipul has always been the favourite of the judges on the show due to his consistent performances. Mehta has also been on the show ‘Voice of India’. Vipul after his win was accompanied by his parents Mukesh Mehta and Alka Mehta.