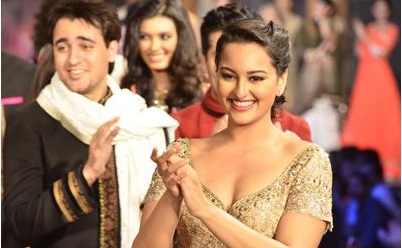 Veteran actress Shabana Azmi managed to get the stars of Bollywood, for her fashion show Mijwan Sonnets in Fabric 2012 on September 3, 2012. The stars like Priyanka Chopra, Imran Khan, Sonakshi Sinha, Chitrangada Singh walked the ramp.

Azmi also managed to rope in the choreographer Prabhu Deva and boxer Mary Kom to walk the ramp. Shabana said, “She was shocked by the unexpected offer, but coming from a small village and humble beginnings, she’s a role model for our girls, who now believe their seemingly-impossible dreams are achievable.”

The boxer was seen wearing a sharara wtih Mijwan embroidery. Shabana also said that she was thrilled to know that the movie ‘Masoom’ was her favourite flick and that the song ‘Tujhse Naraz Nahi’ was also one of her favourite songs.

Earlier Azmi had managed to get Yuvraj Singh to walk the ramp and now Mary Kom has become a role model for the girls in the country. The celebrities at the event wore creations by ace fashion designer Manish Malhotra. The event was held at the Grand Hyatt in Mumbai which was graced by many of the celebrities who walked the ramp for a cause. It was a fund raising show which had aout 23 celebs.