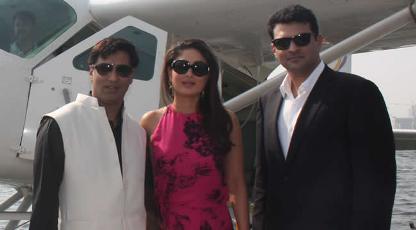 The makers of the upcoming movie ‘Heroine’ have started promoting the flick. The promotional programme began in a stylish and glitzy way on a cruise in Dubai. Kareena Kapoor who plays the lead role in the flick, felt like a true ‘Heroine’ as she alighted from a seaplane at the Jebel Resort on September 3, 2012.

The actress in a statement said, “True to the role that I am playing in ‘Heroine’, this event in Dubai has let me relive the moment of playing the role of a star once again”. The promotional event was attended by Kareena, film maker Madhur Bhandarkar and producer Siddharth Roy Kapoor.