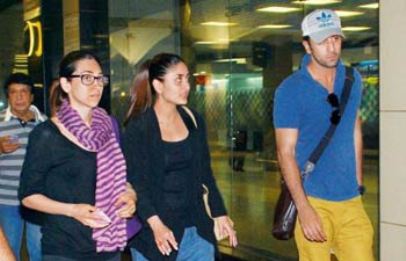 Bollywood actors, Kareena Kapoor, Karisma Kapoor and Ranbir Kapoor were recently spotted at the Mumbai Airport while they were returning from Dubai. The Kapoor clan were returning after a promotional event of the upcoming movie ‘Heroine’.

Karisma had accompanied Bebo on her promotional spree, while Ranbir was holidaying with his family while they celebrated their 60th birthday. The Kapoor trio is rarely seen together so often and they surely made the heads turn at the airport.

Bebo and Karisma were spotted dressed in similar outfits with cropped trousers and black tops and gladiator sandals. The ladies had their hair pulled back, with French manicured nails and the no –make up look.

While Kareena and Karisma took the comfortable way for the journey, Ranbir was spotted in a sporty and stylish look with coloured trousers and a casual blue t-shirt and cap. Both Kareena and Ranbir are all set to release their upcoming movies ‘Heroine’ and ‘Barfi’ respectively. ‘Heroine’ is produced by Madhur Bhandarkar and there are high expectations from the flick, while ‘Barfi’ will mark the debut of the south super star Ileana D’Cruz in Bollywood. Karisma seemed to just accompany her sister while she tried to recover from being separated from her husband.