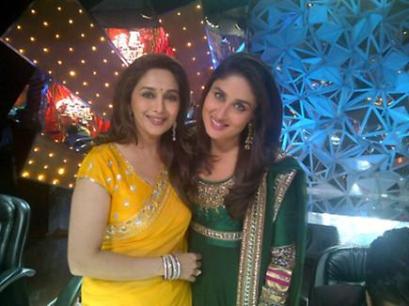 Bollywood actress Kareena Kapoor , after promoting her movie in the TV show ‘Dance Ke Super Stars’ is now all set to enter the sets of ‘Jhalak Dikhhla Jaa’. Bebo will be interacting with the final five contestants of the show and will also be seen grooving to her songs with the celebrity judges Remo D’souza, Madhuri Dixit and Karan Johar.

As the finale of the show fast approaches the competition is getting tougher. It will also be interesting to see Kareena and Madhuri to share the same stage.

Last week the makers of the show had decided not to eliminate any of the contestants. The celebrity dancers on the show had performed with the international choreographers who represented the US version of the show ‘Dancing With The Stars’.

Stand up comedian Bharti Singh, despite being not so competent on the show, is the most popular celebrity due to her jokes and the ways she teases Remo. Bharti in every episode comes up with a comedy act either in her dance or with the host Manish Paul. The latest season of the show has just three weeks left and it is still unclear if the final episode will have three or two contestants.