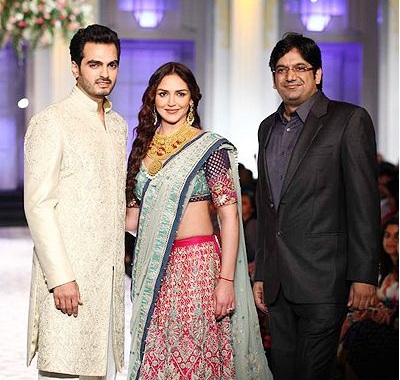 Bollywood’s newly married couple Esha Deol and Bharat Takhtani, on September 15, 2012 walked the ramp together at the Aamby Valley India Bridal Fashion Week in Mumbai. Esha has earlier walked the ramp, it was the first time for husband Bharat on the ramp.

This was also the first time Esha walked the ramp after her wedding. But The actress defended that her husband is a born model and has walked the tamp many times in college and is very confident too.

When asked of Bharat would like to turn to Bollywood, she said, “I had always said that I never wanted to marry a hero. He is a successful businessman and I hope he continues to be one. There is no need for him to become an actor”.

Esha the daughter of the veteran actors Hema Malini and Dharmendra, got married to Takhtani on June 29, 2012 and had got engaged on February 12, 2012. Esha and Bharat were dating for a couple of years before they got engaged. The couple a temple wedding after which a grand reception was thrown by the Takhtanis and Deols in Mumbai which was attended by the biggies of Bollywood.