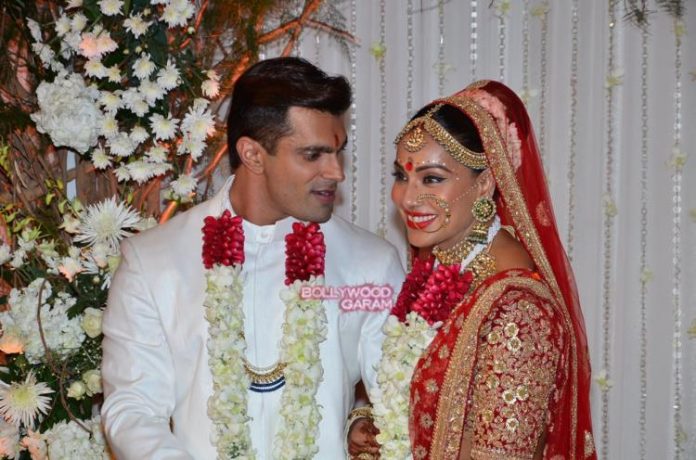 Bollywood actress Bipasha Basu got married to actor Karan Singh Grover in an intimate Bengali wedding in Mumbai on April 30, 2016. The celebrations began with a lavish Mehndi and sangeet ceremony held at a high end club in Juhu , Mumbai on April 29, 2016.

Bipasha for the Mehndi ceremony looked pretty and glowing in a floral pink lehenga with floral jewellery while the groom opted for a plain white kurta and pyjama. The Mehndi ceremony saw the presence of some Basu’s close friends Shilpa Shetty, Raj Kundra, Rocky S, Shamita Shetty and Sophie Choudry.

The wedding ceremony was a traditional Bengali wedding and looked stunning in a traditional lehenga by Sabyasachi. The actress was seen smiling with happiness throughout the ceremonies and also shared some of the candid moments from her wedding on Instagram. The wedding ceremony was an intimate one with only friends and family in attendance but hosted a grand wedding reception for their colleagues from the industry.