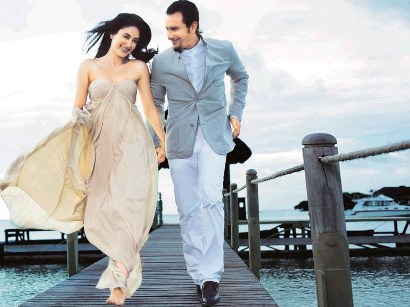 The most happening topic going on in Bollywood at present is Saif Ali Khan and Kareena Kapoor’s October wedding. But not many know what the actual status the couple carries. Bebo recently made a shocking revelation to a national newspaper in which she disclosed some shocking information.

The actress surprised everyone by revealing her marital status. Bebo said that she is already married to Saif and that the couple is simply making it legal on paper which they will be doing in a matter of days.

Kareena also revealed that they have bought a house and are living together since the past five years. But the most shocking part was the revelation in which she said that if they go on a holiday in the month of December then it would be like their 250th honeymoon considering the number of times the couple has holidayed together.

Earlier there have been several speculations made about the wedding of the couple. But the most recent revelation has indeed shocked many people including their fans. Speculations were also made about the venue of the wedding and if the actress will be converting to Islam after wedding like Sharmila Tagore did after her wedding with Tiger Pataudi.