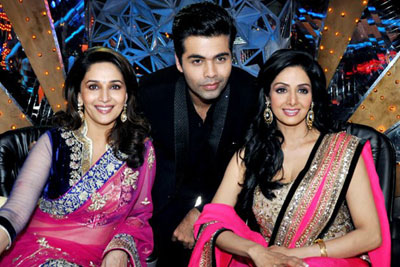 Veteran actresses Sridevi and Madhuri Dixit will come together for the first time on television, on the dance show ‘Jhalak Dikhhla Jaa’. The two will be seen together on the finale episode of the show which will be aired on September 30, 2012 on Colours TV channel.

Madhuri and Sridevi are considered as the veteran of dance in the film industry and it cannot get better while the two come together on the stage of a celebrity reality show. Madhuri had earlier dressed up as Sridevi for the promo of the show on the song ‘Kaante Nahi Kat Te’.

So it would now be lovely for Sridevi to reciprocate the iconic song ‘Ek Do Teen’. This would indeed be a treat for the fans. Madhuri and Sridevi were bitter rivals during their days while they were vying for the same role and the number one position in the film industry.

Sridevi will be on the show to promote her movie ‘English Vinglish’. Madhuri Dixit is the judge on the show along with Karan Johar and Remo Fernandez. Sridevi with the movie will be making a come back in to the movies after 15 years. The actress was married to Boney Kapoor after which she took a back seat to look after family.