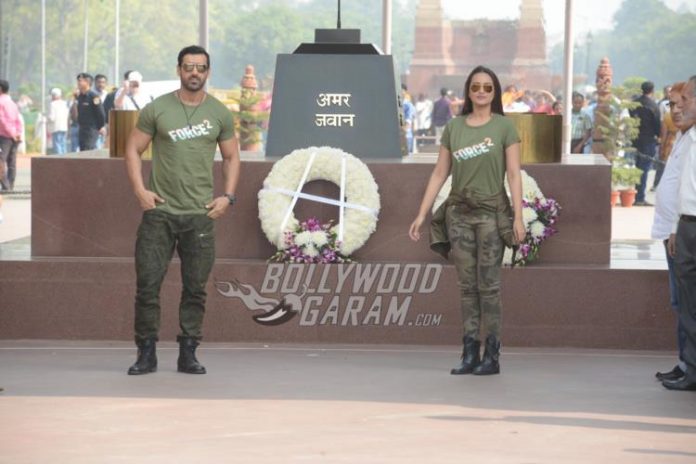 ‘Force 2’ co-stars John Abraham and Sonakshi Sinha promoted their upcoming movie on November 3, 2016 by paying homage to the martyrs of  the Indian Armed Forces at the Amar Jawan Jyoti monument at India Gate in New Delhi.

The promotions of the upcoming movie are going on in full swing. The makers of the movie have also added a special slide to the trailer to salute the martyrs of the country. The actors looked great in their well coordinated military green t-shirts and camouflage pants.

The Vipul Shah thriller starring John Abraham and Sonakshi Sinha in leading roles along with a cameo of Genelia D’souza is set to capture the box office with its style and powerful trailer.

Co-stars John Abraham and Sonakshi Sinha pose exclusively for the cameras at the promotional event.

Produced under the banner of Fox Star studios and Sunshine Pvt. Ltd, it’s is a sequel to the 2011 John Abraham starrer ‘Force’. The movie is an action thriller that revolves around the story of a police officer who is on a mission against corruption in the system. Directed by Abhinay Deo, John Abraham will play the role of ACP Yashwardhan, from the prequel.

We wish the entire team of Force 2 all the very best for the success of their film. Stay tuned for more updates and the movie review!