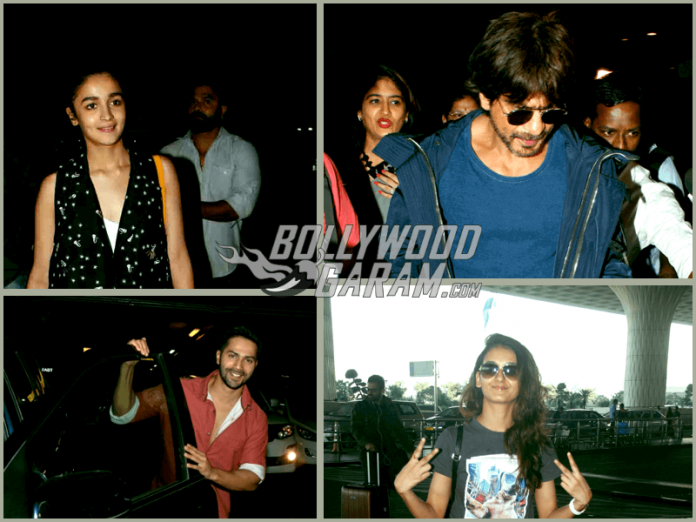 All the Airport Fashion Trends this Week

Airports have now become another fashion runway. Bollywood Stars keep the airports busy with their frequent visits and airport fashion is serious business.

Take a look, and get your airport look right on your next visit!

This one was a bonus for us! We spotted the legendary south superstar Rajnikhanth at Mumbai airport earlier this week. The crazy fan frenzy didn’t get the best of him as he humbly posed for selfies and signed several autographs too!

We caught SRK twice this week! King Khan NEVER fails to woo us be it films or fashion.

The second time we spotted him wearing a sleek navy blue jacket with a navy blue top and really cool baggy pants. And off course, we love the black and white shoes!

Anushka Sharma looks in some real good mood today! The graphic meow t-shirt paired with that long cardigan, it’s quite cool and comfortable! What Say?

Alia never fails to flatter us with her fashion sense. Three-year-old Abraham Khan is giving her some tough competition in his Mickey Mouse t-shirt and navy style pants.

Spotted earlier at the screening of her upcoming movie – Moh Maya Money, the former Miss India is forever ready for the cameras flashing at her. She’s rocking it in her loose fit white dress.

The Kahaani 2 actress was caught leaving the Mumbai International Airport late at night.

We spotted John twice at the airport – and we’d like you to spot the difference in his look!

Heartthrob John Abraham keeps it rather casual in all black look while entering the airport to catch a flight. And then we caught him again, leaving the airport on November 24.

Still thinking about the difference? It’s just his T shirt.

The Badlapur Villain is quite the poser when it comes to shutterbugs!

Shakti Mohan always has her dancing shoes on and those red ones are actually quite attractive! The blue ripped jeans and the casual-tee goes quite well with her. And that forever smiling face, way to go girl!

Dear Zindagi Director, Gauri Shinde likes to keep it casual and comfortable. The chic-cardigan suites her well – the white sneakers have gottne my attention though!

The husband-wife duo is not seen very often publicly! But together here at the airport they definitely make some couple-style-statement. The black and white combination never goes wrong!

Looks like Farah Khan is in a real hurry! The Director/ Choreographer and mother of three paired her long tunic top with leggings, keeping it rather casual.

But the star of her look – her super big blue retro phone receiver connected to her iPhone.

The Award winner debutant, Sooraj Pancholi likes to keep it simple yet charming. The black shades just add to his charming looks.

Singer Sonu Nigam has been widely known for his wacky style sense over the years. The leather jacket, cap, flowery T-shirt and neon shoes definitely live up to his reputation.

This singer who’s wooed us with his weight loss, is improving his dressing style too. The orange t-shirt and classic loafers definitely do him some good.