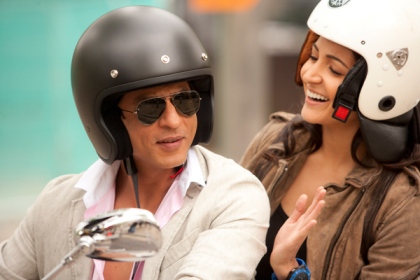 Audiences around the world are eagerly awaiting the release of the upcoming movie ‘Jab Tak Hai Jaan’ (JTHJ) starring Shahrukh Khan, Katrina Kaif and Anushka Sharma, as this was Yash Chopra’s last film before his recent demise. Fans in Pakistan might have to face disappointment though, as there is a possibility that the movie might be banned in the country.

After movies such as ‘Agent Vinod’ starring Saif Ali Khan and ‘Ek Tha Tiger’ starring Salman Khan, there are chances that ‘Jab Tak Hai Jaan’ might be banned as it might run into problems with the Pakistani censor board. Reports have revealed that the movie has Shahrukh Khan playing the role of an officer from the bomb disposal squad in the Indian Army.

According to our sources,  in the movie Khan will be involved in an operation in Kashmir. The authorities from Pakistan might raise questions over the sensitive Kashmir issue, which has created a rift between the two nations for 65 years. Some reports have also said that the promos of the movie have already been removed from TV channels in the Muslim dominated country. JTHJ is yet to be reviewed by the Pakistan Censor Board and many fans in the country are keeping their fingers crossed.

On the other hand people from India are looking forward to the movie as it was the last work of veteran Bollywood filmmaker Yash Chopra, who passed away of Dengue on October 21, 2012.