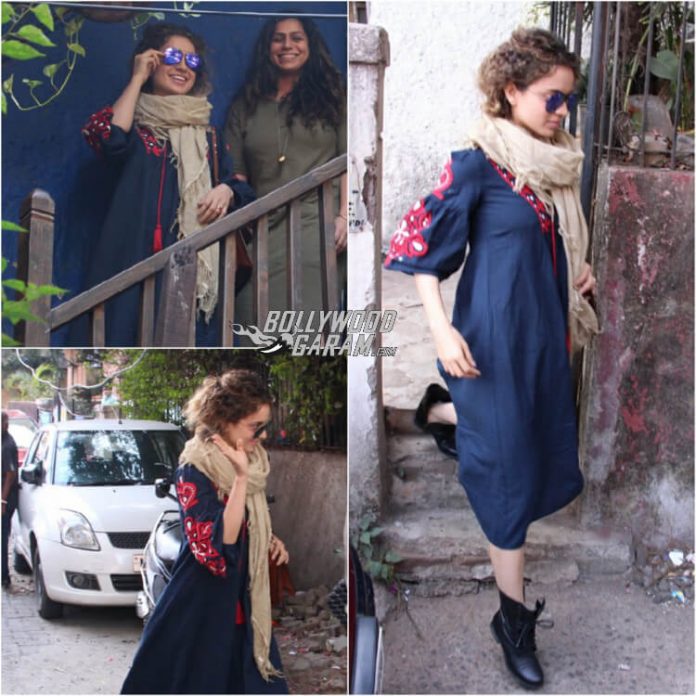 Bollywood Garam spotted Kangana Ranaut in Bandra on December 12, 2016. She ruled the boho-chic attire! The actress was snapped wearing a navy-blue dress, with traditional Indian work patches. Her scarf and black ankle booties complimented to her look perfectly!

All her looks have been extremely fresh and experimental. Be it her airport looks, dinner dates or movie screenings she knows how to slay it in all her outfits.

Kangana looked pretty cool and casual but still effortlessly stylish! Take a look at the pictures, and I’m sure they will give you major fashion goals –

The versatile actress known for outstanding performances in films like ‘Queen’ and ‘Tanu Weds Manu’ series was rather happy to wave and smile for the shutterbugs as Bollywood Garam caught her leaving from one of the bungalows in on Monday afternoon. She was accompanied by a few close friends on her visit.

This click is our personal favorite as it flaunts her victorian style boots and bohemian dress perfectly!

We hope to spot Kangana more often at Award Shows and other event in 2017 and wish her all the very best for her upcoming film Rangoon.

Rangoon is a period film, set in World War 2. It is Directed by Vishal Bhardwaj and stars Shahid Kapoor in the lead, opposite Kangana Ranaut. The film is expected to release on February 24, 2017.

Stay tuned for more updates on your favorite stars on Bollywood Garam!