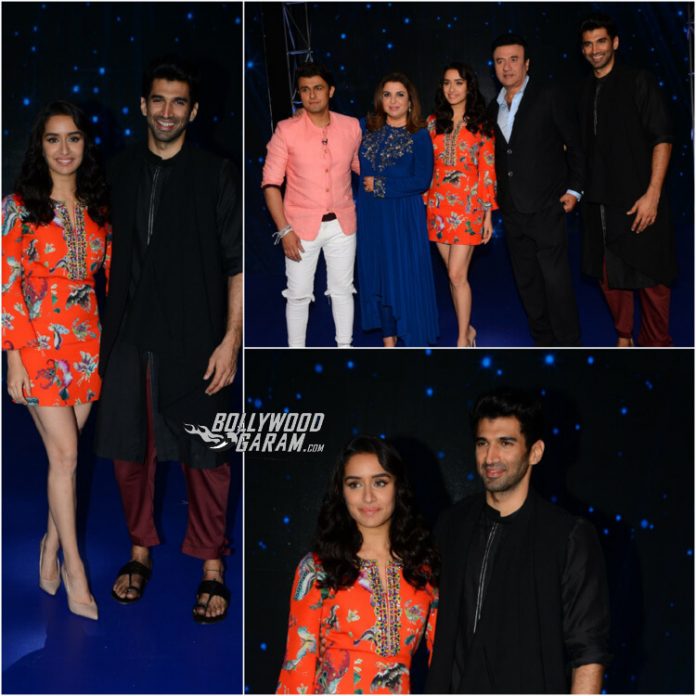 The lovely couple was spotted shooting for an episode of Indian Idol Season 9 on December 12, 2016 to promote their upcoming movie ‘ Ok Janu’.

Take a look at these pictures, from the sets of Indian Idol Season 9 – I’m sure you’ll love them!

Handome hunk Aditya Roy Kapur went for a rather traditional look for the promotion of his upcoming film – we caught him sporting a black silk kurta with a waistcoat and black kohlapuris.

‘Ok Janu’ is a romcom that’s set to release on January 13, 2017. The film is Directed and Written by Shaad Ali and while it’s being produced under the banners of Mani Ratnam (Madras Talkies) and Karan Johar (Dharma Productions). The movie is an official remake of Mani Ratnam‘s Tamil film ‘OK Kanmani’.

The chemistry between Shraddha Kapoor and Aditya Roy Kapur is undeniably hot in the hit trailer of ‘Ok Janu’. Check it out right here!

To our delight, Farah Khan planned a little surprise for Shraddha Kapoor by inviting her father – Shakti Kapoor to the shoot! Shraddha ran to hug her dad, and the father-daughter duo enjoyed a cute moment on stage.

Aditya Roy Kapur and Sharddha Kapoor look stunning together! Don’t you think so?

Shraddha Kapoor sizzles in this little orange dress as she poses for the shutterbugs on arriving on the sets of the Sony TV reality show.

We wish the entire team of ‘Ok Jaanu’ loads of luck for the success of their film, along with the entire cast and crew of Indian Idol Season 9, for making it bigger this year!