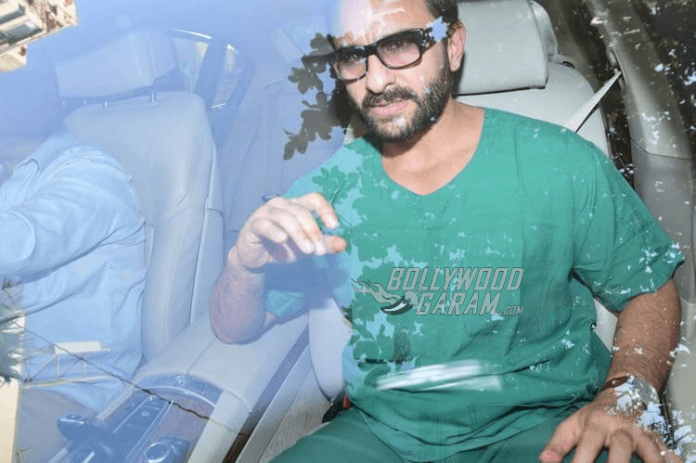 Bollywood Garam is delighted to announce that our favorite Bollywood diva Kareena Kapoor Khan has become a mother for the first time! She gave birth a beautiful baby boy today morning and we caught all her close relatives land at Breach Candy Hospital, Mumbai to be at her side for this special day!

Taimur Ali Khan Patudi – is the name the name the couple decided on. Proud father Saif Ali Khan released a statement confirming the same and thanked the media and fans for their continued support throughout Kareena’s pregnancy.

We caught proud father Saif Ali Khan in a rather tensed mood arriving at Breach Candy Hospital earlier today, to be at wife Kareena Kapoor Khan’s side while she brings their bundle of joy to this world.

And here’s Karena Kapoor’s mother, Babita Kapoor arriving to be at her daughter’s side as she becomes a mother for the first time – just like any supporting and loving mother would!

We even caught father Randhir Kapoor with Grandmother Krishna Kapoor arriving at Breach Candy Hospital to congratulate Saif and Kareena on the birth of their lovely son – Taimur Ali Khan.

Elder sister Karishma Kapoor too drove down to Breach Candy Hospital to visit ad congratulate Kareena Kapoor Khan. She was happy to pose for the shutterbugs!

Here’s doting mother-in-law Sharmila Tagore on her way to meet her grandson – Taimur Ali Khan Pataudi for the first time!

Close friend Rhea Kapoor too drove down to the hospital in the evening to meet Kareena Kapoor khan and congratulate the lovely couple on birth of their first son.

Aunt and grandmother Ritu Nanda too rushed to Breach Candy Hospital to congratulate her neice Kareena Kapoor on the birth of her first son.

Lastly, Bollywood Garam managed to catch a glipmse of Saif Ali Khan’s brother-in-law, Kunal Khemu along with his sister Soha Ali Khan (not visible in the picture) arriving at the hospital to congratulate the lovely couple!

You need to look at the picture a bit carefully to notice Kunal Khemu way back in the backseat of the car. There he is!

Bollywood Garam congratulates lovely Saifeena and wishes them all the best!