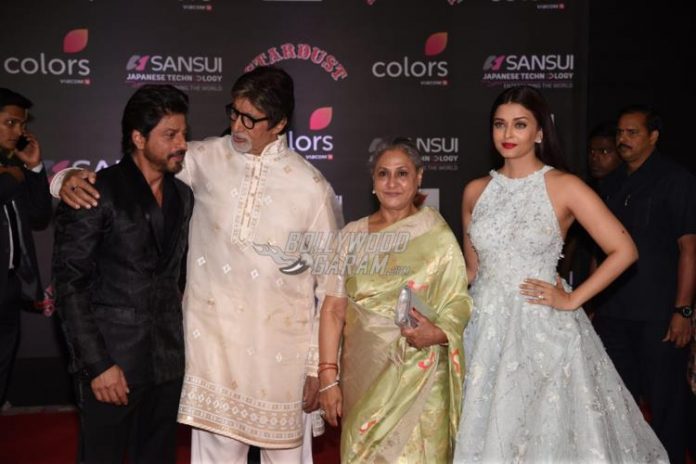 Top celebrities from Bollywood turned up for the Stardust Awards 2016 held in Mumbai on December 19, 2016.

The awards night was splendid as we caught all the big stars in their best ensemble – taking some of the biggest awards away.

Mr. and Mrs. Bachchan looked elegant in silk traditionals and Senior Bachchan even posed with his award for us.

Can we all just take a moment to admire teh sheer beauty of the dress fashionista Sonam Kapoor wore for the award show. It is absolutely the most splendid gown we have seen in a while!

Sridevi would give the best rappers in town a run for their money with all that bling. She pulls it off like a diva – Way to go Sridevi!

Did anybody notice all that spiky bling on Karan Johar’s shoes?

We caught the Kapoor beaming with joy as Rishi Kapoor recieved his award for Best Actor in a supproting Role (Male) for his film Kapoor and Sons.

Looks like Jacqueline and Sonam Kapoor ended up hiring the same designer – or they got their hearts settled on the same dress and fashion icon Jacqueline got a covered-up version of it designed.

Whatever it may be – we love the way our Bollywood fashionistas – Sonam and Jacqueline looked on the red carpet at the award show!

Here is the full list of winners for Stardust Awards 2016 –

Best Actor in a Negative Role – Jim Sarbh for Neerja

Most Iconic Performance of the Year – Aishwarya Rai Bachchan for Sarbjit