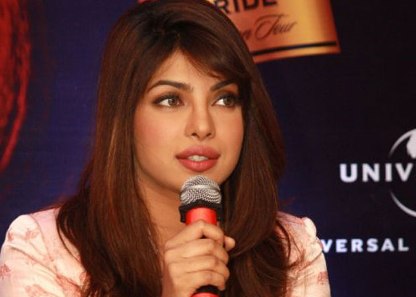 Bollywood actress turned pop star Priyanka Chopra was in Delhi on October 25, 2012, to promote her new single ‘In My City’. The actress had appeared as the brand ambassador for the Blender’s Pride Fashion Tour.

Priyanka rocked the party as she was seen DJ-ing across four clubs including Hard Rock Cafe and Buzz in the capital as well as Striker and Seven Degrees in Gurgaon. It seemed as though the actress is trying to reinvent her public image, turning from actress to pop star.

The Aitraaz star had left her figure hugging dresses at home for the promotion and was seen in black skinnies and shimmery gold top. Priyanka also talked about her acting career and shared her excitement and enthusiasm over her first musical venture.

The new single for the Bluffmaster! actress’ song features American rapper will.i.am. While talking about the lyrics of the song, Priyanka said that it is not about a particular city, since her upbringing has been across the cities like Lucknow, Ladakh, Mumbai and Delhi. This is also the first international collaboration for the actress.

Chopra said that she is overwhelmed by the response for her debut single, which has been written by Ester Dean and is produced by RedOne Productions, a company which also produces for Lady Gaga.