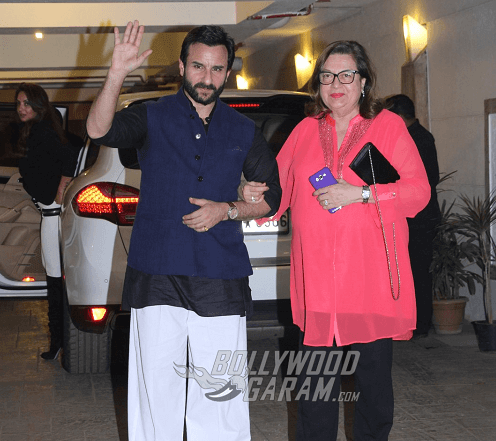 It was a small private gathering to which only close family members and friends were invited.

Amrita Arora was snapped with her husband as she arrived at close friend, Kareena Kapoor’s residence to attend the Christmas Bash on Saturday.

She looked gorgeous in an olive colored cold shoulder dress as she posed solo for the cameras.

Kareena’s father and third time grandfather Randhir Kapoor too showed up with a big Christmas present in hand. We’re guessing it’s for Taimur!

The beautiful couple Soha Ali Khan and Kunal Khemu, too were spotted arriving at the exclusive Christmas bash. The couple was happy to pose for shutterbugs, while we love Soha’s black skirt!

We caught Maliaka Arora khan too at Kareena and Saif’s Christmas bash. Seems like she headed to Mt. Mary’s Church to attend Midnight Mass afterwards.

The shy Prince of Pataudi was spotted looking rather nervous, faced by scores of shutterbugs and papparazzi. We are definitely keeping an eye out for his possible Bollywood debut though!

That’s all from Saif and Kareena’s Christmas Bash, we hope you enjoyed the photos.

Stay tuned for exclusive updates on all your favorite celebrities on Bollywood Garam.