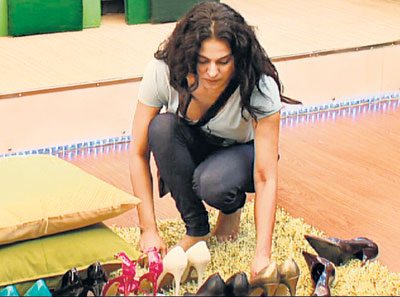 Pakistani actress Veena Malik threw her shoe on Bollywood actor Ashmit Patel in the house of Bigg Boss 4. Veena was returned her stilettos after they were hidden for a secret task, and Veena told Ashmit to wash the shoes as they got dirty when hidden. When Ashmit refused to wash them, this made Veena furious.

In a secret task assigned to actress Shweta Tiwar and Ashmit, some of the favorite things belonging actress Dolly Bindra and actress Veena Malik had to be hidden. Veena’s stilletos and Dolly’s makeup kit were thereby stolen by Shweta and Ashmit.

Veena argued with Ashmit saying that, since two months she had been washing Ashmits’s cloths, then what was the reason Ashmit wouldn’t wash her shoes. Later,.while Veena was talking with the other inmates in the house, she expressed her grief saying that, she had many times washed Ashmit’s undergarments.

However Shweta and Ashmit, who were successful in completing the secret task, were rewarded by Bigg Boss with a candle lit dinner just for the two.