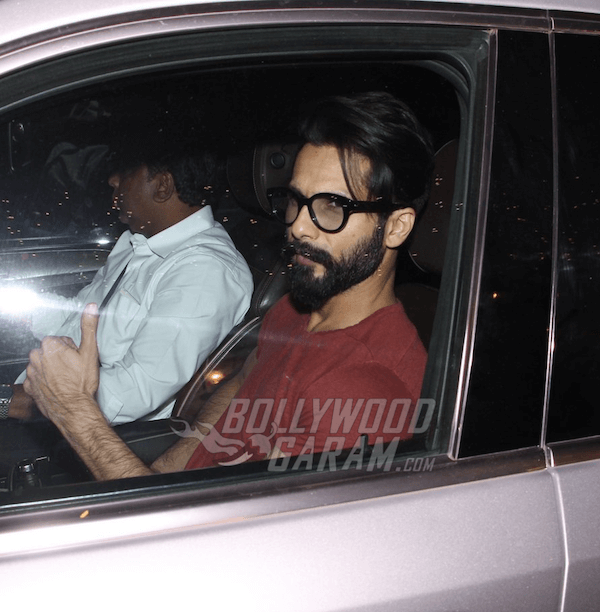 Bollywood Garam caught Actor Shahid Kapoor leaving from ace hairstylist Aalim Hakim’s Salon in Bandra, Mumbai on January 3, 2017. The proud father a baby girl, Misha was spotted getting a makeover at the salon.

We have all the pictures of the two old friends having a good time at the salon, hope you enjoy the gallery!

Here’s a snap of Shahid Kapoor in a serious conversation with Aalim Hakim in his salon.

Here’s Shahid Kapoor exiting the salon in Bandra, right behind hairstylist Aalim Hakim. He was last spotted at Mumbai International Airport with wife Mira Rajput and baby Misha leaving for a family Christmas vacation. Check out all the photos here.

Looks like Aalim Hakim needed a little motivation from the actor to embrace all the paparazzi and wave out to the cameras!

we spotted the Udta Punjab actor is a rather casual look, wearing a plain red T-shirt with blue dry fit knee length shorts and grey slippers. We love his trendy glasses and well trimmed beard though!

And finally, here’s Shaihd Kapoor leaving from the salon in his car. The actor has been all over the news after his appearance and juicy interview with wife Mira on Koffee With Karan which aired last Sunday. This interview was in fact Mira Rajput’s first public interview where she revealed details of how the two met and eventually fell madly in love!

Get full details from the Koffee with Karan episode starring Mira and Shahid right here.

The actor has been busy shooting for Sanjay Leela Bhansali’s magnum opus Padmavati, co-starring along with Ranveer Singh and Deepika Kapoor. He also recently release the poster of his upcoming film Rangoon, opposite Kangana Ranaut in the lead. The film is directed by Vishal Bhardwaj and also stars Saif Ali Khan.

We hope to see a lot more of Shahid Kapoor on screen in 2017 and are eagerly awaiting the release of his upcoming film Rangoon on February 25, 2017. See the full trailer of Rangoon.

Stay tuned for garam updates on Shahid Kapoor only on Bollywood Garam.