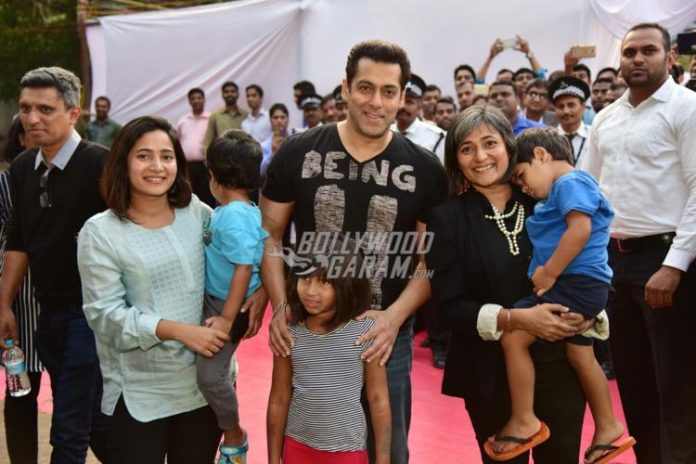 The bad boy of Bollywood attended a promotional event in Mumbai

Superstar Salman Khan attended the Parle Agro annual sales event held in Mumbai on January 17, 2017. The actor was all smiles for the shutterbugs and was seen in a black Being Human t-shirt and jeans.

On the work front, the actor was last seen in the movie ‘Sultan’ and is currently filming for the upcoming movie ‘Tubelight’ which is directed by Kabir Khan. The actor is also hosting the popular TV show ‘Bigg Boss’.

The actor was recently provided reprieve from a local court where a pending case of him shooting an endangered species was still pending. The troubled actor has been in and out of trouble with the law of the past decades since he made it into the limelight in Bollywood. Apart from the black buck case that has been hanging over his head for many years now, he was also in trouble with the law for drunk driving that lead to the deaths of innocent sidewalk sleepers.

In related news, Salman has not been in any major movies recently. He seemed to be taking a break from the limelight and instead concentrates on more charitable endeavors that help him improve goodwill among the masses. His fan following remains strong as you can see everyday outside of his Bandra home where scores of eager fans travel distances to catch a glimpse of the bad boy.

It’s good to see him back and still being able to compete with the younger actors. This generation still loves Sallu bhai and the way that he is able to captivate audiences in his movies, even though the plots may have major loopholes. We all love a good Salman Khan movie, don’t we?