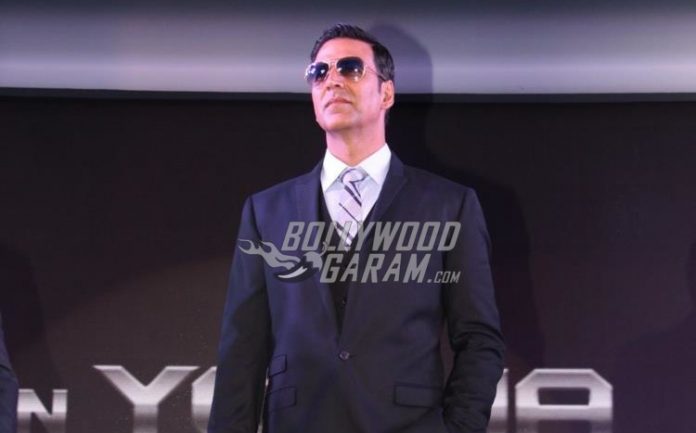 Action star of Bollywood Akshay Kumar and beloved wife Twinkle Khanna are celebrating 16 years of marriage on January 17, 2017. Twinkle on their anniversary posted a video in which they are seen running towards each other and had the caption, “16 years of trying to kill each other and we still haven’t succeeded. 16th anniversary. Partners in crime”.

Twinkle and Akshay have worked in films like ‘Zulmi’ and ‘International Khiladi’ and got married in 2001. The couple had their first son Aarav in 2002 and then a daughter Nitara in 2012. Akshay continued with in the world of entertainment while Twinkle took a back seat in showbiz and turned in to an entrepreneur and author.
On the work front, Akshay is working on the upcoming project ‘Toilet: Ek Prem Katha’ which also stars Bhumi Pednekar and is due to hit the theatres on June 2, 2017.

Twinkle has not been in any movies since she got married to Akshay. Daughter of veteran Bollywood actors, Twinkle and Akshay Khanna, the star wanted to concentrate on family instead of films. However, the entrepreneur is a well-known designer in the Bollywood circles and has contributed her talent to a number of homes with her penchant for everything fashionable and stylish. Recently, she was in an ad for Godrej Nature’s Basket, promoting organic food. She is known for her healthy lifestyle and stylish way of living.

Akshay and Twinkle have been the closest couple for the longest time. Though a lot of Bollywood marriages have been mired in scandals, for example, Shah Rukh Khan and Priyanka Chopra’s alleged closeness, or the divorce of Farhan Akhtar with B-Blunt owner, Adhuna, these two have managed to evade all possible scandals and tabloid news feeds with their strong bond.

We wish both, Akshay Kumar and Twinkle Khanna a happy married life, along with their two children – Aarav and NItara, a happy time as a family together.