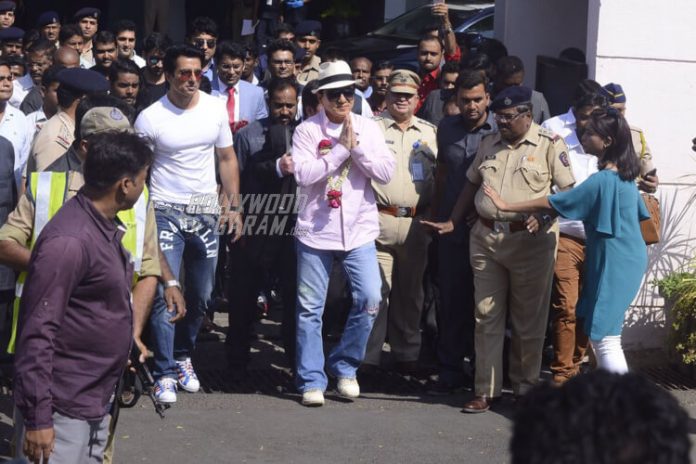 Jackie Chan was snapped at Mumbai Airport live on January 23, 2017 as he arrived for  promoting of his upcoming movie Kung Fu Yoga, in India.

Jackie Chan waves to the camera and his fans when he lands at Mumbai airport for promoting his upcoming film – Kung Fu Yoga starring Sonu Sood and Disha Patani.

Looks like he headed straight to sets of The Kapil Sharma Show to begin promotions of his movie!

After which he went to attend a grand Press Conference – Check out the full gallery here!

Kung Fu Yoga is an upcoming multi-lingual action-adventure comedy film to be directed by Stanley Tong. The film is a Chinese-Indian co-production of Taihe Entertainment and Shinework Pictures (China). The film is scheduled for release in China on January 28, 2017 and a day before in the USA, on January 27.

The acclaimed international actor received a warm Indian welcome with Tilak and a garland of flowers. All his co-stars and producer were there to great him at the Airport today morning.

He kept his look casual and simple with a light pink Shirt and jeans and topped it off with a classy white hat.

Here’s a snap of the entire cast of Kung Fu Yoga at Mumbai Film City, ready to shoot for a promotional episode of The Kapil Sharma Show!

Looks like the international actor changed into white pants before commencing the shoot. It’ll be a fun filled episode to watch, that’s for sure!

Jackie Chan will be sharing screen space with the Indian Actors Sonu Sood and Disha Patani in the movie. Kung Fu Yoga releases in India on February 3, 2017. Don’t miss it!

Sonu Sood poses in front of the cameras as he was spotted at Mumbai airport to receive Jackie Chan. Sonu Sood was last seen on screens with Tamannaah Bhatia, Prabhu Deva and Amy Jackson in the movie – Tutak Tutak Tutiya, which released in 2016.

For more updates on Jackie Chan’s visit to India, stay tuned only on Bollywood Garam!