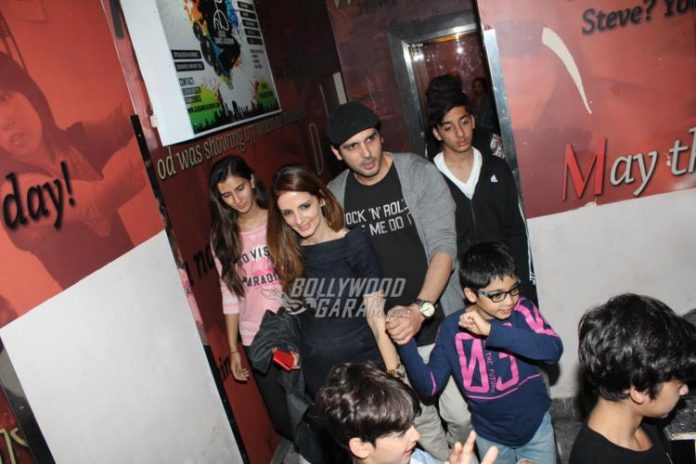 Hrithik Roshan and Susanne Khan all smiles after screening

Celebrities from Bollywood attended the special screening of the upcoming movie ‘Kaabil’ held at PVR in Mumbai on January 21, 2017. The screening event saw Rishi Kapoor, Zayed Khan, Neetu Kapoor, Yami Gautam and others.

What caught attention was, Hrithik and his former wife Susanne Khan coming out smiling along with children Hrehaan and Hridhaan. Susanne and Hrithik have been snapped together several times recently. The cordialness between the two has proved that they now share a great chemistry with each other despite the bitter divorce. Also in attendance was Hritik’s father, the legendary Bollywood actor and producer, Rakesh Roshan, who came in support of his son for his great comeback movie. Zayed Khan, a lose friend of the Roshans was also in attendance, to support his long-time buddy. Actress-turned-activist, Shabana Azmi also attended the premier.

Hrithik will soon be seen on the silver screen with Yami Gautam in the upcoming movie ‘Kaabil’ which is all set to hit the theatres on January 25, 2017. The movie releases opposite Shahrukh Khan’s ‘Raees’. Hrithik and Shahukh are doing their best in terms of the promotions of their respective movies. Hrithik was recently seen interacting with winners of Bravery Awards in Delhi while Shahrukh was seen boarding a train from Mumbai to New Delhi.

Hrithik will be seen playing a blind man in love with a blind girl. The trailer of the movie looks impressive and it is now up to the audience to decide if ‘Raees’ or ‘Kaabil’ earns big at the box office.