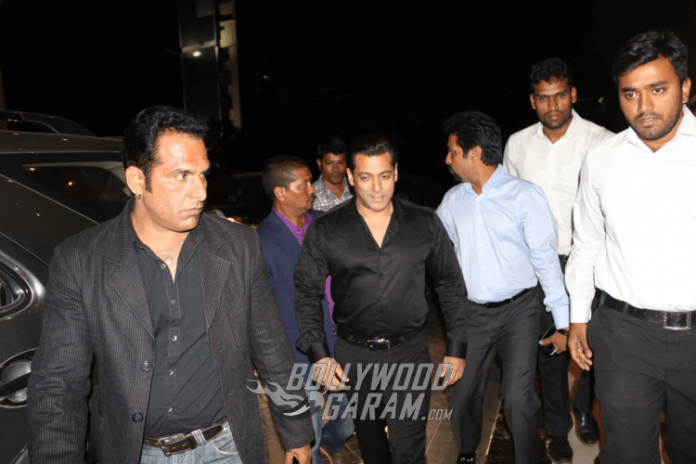 Bollywood Dabangg Salman Khan was snapped by the cameras when he arrived atJW Marriott earlier today evening to personally meet and greet Chinese sensation Jackie Chan, today, January 24 2017. He was accompanied by his young co-star from his upcoming movie Tubelight, Matin Rey Tangu.

Jackie Chan is on a short visit to India for promoting his upcoming movie Kung Fu Yoga. Seems like he’s currently staying at JW Marriott, Juhu as several of his co-stars, his movie director and other Bollywood Celebrities have been spotted frequenting the hotel, since he arrived yesterday.

Bollywood Garam was live with Jackie Chan yesterday, 23 January, when he arrived at Mumbai airport where he was received by his co-stars from Kung Fu Yoga – Sonu Sood and Disha Patani. The internationally acclaimed actor and Kung Fu practitioner was given a warm Indian welcome with a garland of flowers and tilak.

Jackie Chan headed straight, from the airport, to sets of The Kapil Sharma Show, for shooting a promotional episode for his upcoming movie. Later on he was spotted with complete cast of Kung Fu Yoga at the Press Conference for promotions and was later joined by Yoga enthusiast Shilpa Shetty at the venue.

Check out all the pictures from the venue –