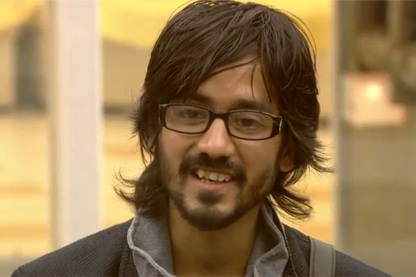 Aseem Trivedi, the controversial cartoonist has become the fourth contestant from reality show Bigg Boss 6 to be eliminated. Just a day before the eliminations, some suspected activists of the Republican Party Of India had pelted stones on the office of the Colours Channel in Andheri, Mumbai. The activists had demanded the elimination of the cartoonist, as he had hurt the sentiments of the Dalit community through his cartoons. Aseem said that he did not know if that was the reason of his elimination and that it did not matter, as his work on the show was over and he had wanted to come out.

The party activists had objected to the participation of the cartoonist, saying that he had hurt the sentiments of the Dalit people by his cartoons which insulted the national emblem and other constitutional symbols. Trivedi said, “Whenever you set out to do some good work, there are people who raise objections.” The cartoonist added that they misunderstood him and that he does not have anything against them.

Trivedi also argued that he hopes that at some point they would understand his cause. The cartoonist was nominated along with Karishma Kotak, Sampat Pal and celebrity hairstylist Sapna Bhavnani. Before entering the show, Trivedi was charged with sedition for displaying cartoons which were described as questionable in the name of national interest.