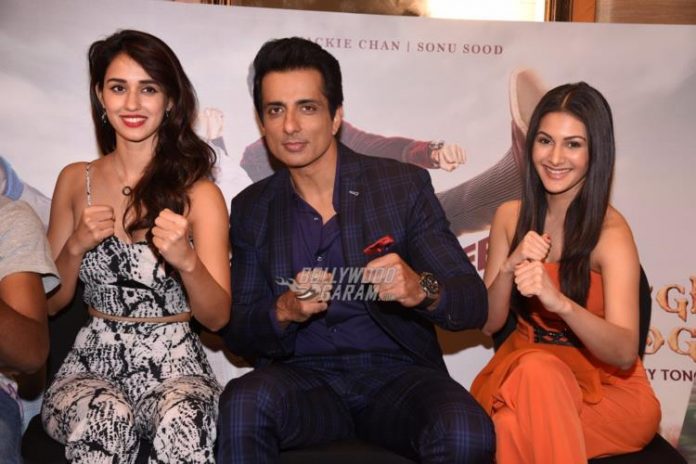 Actors Sonu Sood, Disha Patani and Amyra Dastur promoted their upcoming movie ‘Kung Fu Yoga’ at an event in Mumbai on January 25, 2017. Lead actor Jackie Chan, was in India recently for the promotions.

Disha, Sonu and Amyra are continuing to promote their movie which is all set to hit the theatres on February 3, 2017. The movie has Jackie Chan and a mix of Chinese and Indian actors. Amyra looked great in an Orange outfit while Disha looked pretty in a printed crop top and trousers. Sonu appeared in a blue checked suit.

The story of the movie is about a renowned professor of archeology at the Terracotta Warriors Museum in Xi’an and is teaming up with young Indian professor Ashmita and assistant Kyra to find the Magadha treasure in Tibet.
The movie will hit the theatres in China on January 28, 2017 and in India on February 3, 2017. Jackie promoted the movie in India on various platforms and had a great time interacting with his Indian fans and stars.

Veteran Hollywood producer, director and actor Jackie Chan also stars in the movie. He recently received an honorary Oscar for his immense contribution to international films. For decades now he has entertained audiences with his mild humor and unmatched martial arts style. As a native of China, he initially could not speak a word of English but has slowly build an empire with his talent and hard work. It’s great to see him now contributing to Bollywood!